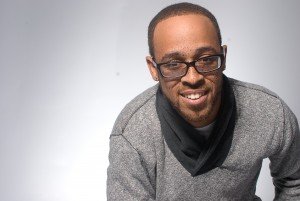 Darell Campbell Jr. actually appears to be larger when seen with one of his instruments. This proves Detroit’s hustle, toughness, and balance produces a musical surface that actually magnifies under stage lights. As a musician, songwriter, producer, teacher, and preacher, stages are common place to express joy.

I was raised in the midst of rehearsals and band meetings alongside his father. During a Christmas vacation, at the age of 10, he secretly used his father’s recording equipment and recorded and produced his very own rap album. He says, “I just pushed the buttons that I saw my dad press. I guess that sparked my curiosity to do something musically.” However, his career didn’t actually take off until he was 12 when he was allowed to play piano on Sunday mornings at church. After realizing that he would make a much better musician than football player, he quickly grasping advanced musical concepts. He ventured off to learning stringed instruments in high school in the Detroit Symphony Civic Orchestra. He quickly learned of the truly amazing musical gift that God had given him. After graduating from Detroit’s Cass Technical High school, he bypassed the traditional collegiate education to try his hand in the traveling workforce as a touring keyboardist.

By the young age of 30, I’ve travelled through most of America’s states and now lend my hand at creating opportunities for other children to have some of the opportunities I had at a young age. The things we enjoy are given to us by God to eventually become what we use to mark our fingerprint in life. My fingerprint is recorded with The Dramatics, WAR, India Arie, Stevie Wonder, Holland-Dozier-Holland, Anita Baker, Kris Johnson, Mary Wilson, Mike Powell, Dorinda Clark-Cole, HotSauce, Yolanda Adams, LaToya Turrentine, Obie Trice, Freyda Payne, Eminem, MTV, VH1 and each day I strive to touch more.